| KeckZine CardioVascular Thoracic Next → ← Back

In the emerging field of total endovascular repair of thoracoabdominal aneurysms, there currently are four techniques used for repair: the sandwich technique, the double barrel technique,1 the fenestrated technique and the branch graft technique. Most centers with expertise in this procedure favor one of these techniques depending on investigational device exceptions (IDEs) or ongoing industry-sponsored trials.

Because surgeons at the USC CVTI are experienced in all four techniques, we are able to examine each patient’s aortic anatomy and determine the technique that will work best. In addition, our team of experts has further refined the sandwich technique into a procedure termed “multilayered parallel grafting.” 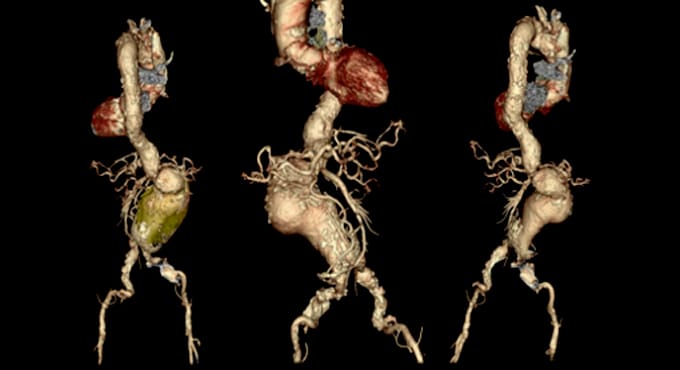 Figure 1: CT angiography showed that the thoracic and paravisceral aortic segments, as well as the iliac arteries were severely angulated.

A 79-year-old male presented to an outside hospital with abdominal pain radiating to his back. After a CT scan revealed a 9-centimeter-long type IV thoracoabdominal aortic aneurysm (TAAA), the patient was transferred to Keck Hospital of USC. With comorbidities including severe chronic obstructive pulmonary disease (COPD) and coronary artery disease, the patient was deemed extremely high risk for open repair of the TAAA and could only be considered for endovascular repair.

Surgeons discovered highly challenging arterial anatomy through imaging. The patient’s iliac arteries, through which the stents needed to be delivered, were severely tortuous. In addition, the aorta was highly angulated through the connections to the mesenteric and renal branches (Figure 1). As such, no single commercially-available endovascular device was available to repair the aneurysm. Surgeons chose to perform an urgent repair endovascularly using multiple off-the-shelf components.

Because surgeons at the USC CVTI are experienced in all four techniques, we are able to examine each patient’s aortic anatomy and determine the technique that will work best.

Surgeons employed a multilayered parallel grafting technique for the endovascular TAAA repair. The aorta and the iliac arteries were straightened by placing stiff wires from bilateral femoral arteries in a “buddy” fashion. Additionally, a brachio-femoral “body-floss” wire was established. Over this body-floss wire, thoracic stent grafts were deployed in multiple layers, alternating with parallel branch stents into visceral and renal arteries. Distally, a bifurcated modular stent-graft was deployed down to the common iliac arteries, achieving complete aneurysm exclusion (Figure 2).2

Following the procedure, the patient was ambulatory and had good functional status. To date, 15 patients have undergone the multilayered parallel grafting procedure in an urgent or emergent setting to repair a TAAA.

The USC CVTI also offers endovascular revision of previously failed endografts. Often, the devices fail because the aneurysm progresses proximally into a thoracoabdominal aneurysm, which indicates that the off-the-shelf device may not have been the optimal initial treatment. Patients with failed devices can be referred to Keck Medicine of USC for an endovascular revision using a technique tailored to the patient’s history and presentation.