Figure 3 – Perfusion maps demonstrating mismatch between core infarction (pink) and vulnerable tissue at risk (green) that might be salvaged by mechanical thrombectomy. Keck Medical Center of USC is one of the few centers in the country using advanced RAPID software to generate these maps for decision making in strokes lasting greater than six hours as part of a National Institutes of Health-sponsored clinical trial (NCT02586415).

Several patient factors are evaluated to determine if an endovascular approach is suitable. For instance, our team of physicians will assess the site of vessel occlusion, anatomy of the vessel, severity of the patient’s neurologic deficit and whether the tissue is still salvageable to decide on an approach for therapy. Once a patient is approved for treatment, systems of care are in place at Keck Hospital of USC to ensure efficient movement of the patient through various points in the hospital to ensure a timely treatment. If an endovascular procedure is not suitable for the patient, we have expertise in open cerebrovascular repair at USC Neurosciences.

To more accurately assess a patient’s condition, we use advanced imaging tools (such as RAPID CT perfusion and MR perfusion imaging) to help distinguish between the permanently damaged central core of the brain tissue from the surrounding envelope of viable tissue. These imaging tools are very standardized and reliable from one patient to the next. 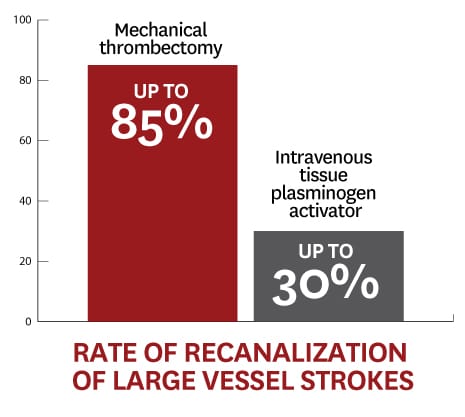